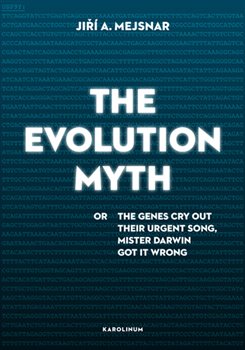 The Evolution Myth, or The Genes Cry Out Their Urgent Song, Mister Darwin Got It Wrong


The origins of life, species, and man continue to interest scientists and stir debate among the general public more than one hundred and fifty years after Charles Darwin published On the Origin of Species. The Evolution Myth approaches the subject with two intertwined objectives. Jiří A. Mejsnar first sets out to convey the advances made in cosmology, molecular biology, genetics, and other sciences that have enabled us to change our views on our origins and our relationship with the universe. Scientific advances now allow us to calculate, for example, the age of the universe, the period in which biblical Eve lived, and, with good justification, to reconsider the possibility that the Neanderthals and primates might be our ancestors. The author’s second objective is to use biology to explain why evolution cannot have taken place in the way that is most commonly assumed. Mejsnar builds his case around gene stability and on the sophisticated modern techniques for gene manipulation, the complexity of which make these modified genes inaccessible to nature. Development of life on Earth is a discontinuous, saltatory progression that results in stages following from preceding latent periods in which new forms suddenly appear and possess new types of genome. This, the author argues, is difficult to reconcile with the hypothesis of continuous biological evolution based on the natural selection of random variations. Taking a new approach to a much-debated subject, Mejsnar distills complex information into a rreadable style. The result is a book that as sure to get readers talking.

The origins of life, species, and man continue to interest scientists and stir debate among the general public more than one hundred and…