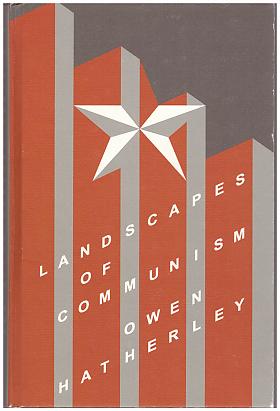 In the craven world of architectural criticism Hatherley is that rarest of things: a brave, incisive, elegant and erudite writer, whose books dissect the contemporary built environment to reveal the political fantasies and social realities it embodies. (Will Self). During the course of the twentieth century, communism took power in Eastern Europe and remade the city in its own image. Ransacking the urban planning of the grand imperial past, it set out to transform everyday life, its sweeping boulevards, epic high-rise and vast housing estates an emphatic declaration of a non-capitalist idea. Now, the regimes that built them are dead and long gone, but from Warsaw to Berlin, Moscow to post-Revolution Kiev, the buildings, their most obvious legacy, remain, populated by people whose lives were scattered and jeopardized by the collapse of communism and the introduction of capitalism.

Landscapes of Communism is an intimate history of twentieth-century communist Europe told through its buildings; it is, too, a book about power, and what power does in cities.In exploring what that power was, Hatherley shows how much we can understand from surfaces - especially states as obsessed with surface as the Soviets were. Walking through these landscapes today, Hatherley discovers how, in contrast to the common dismissal of 'monolithic' Soviet architecture, these cities reflect with disconcerting transparency the development of an idea over the decades, with its sharp, sudden zigzags of official style: from modernism to classicism and back; to the superstitious despotic rococo of high Stalinism, with its jingoistic memorials, palaces and secret policemen's castles; East Germany's obsession with prefabricated concrete panels; and the metro systems of Moscow and Prague, a spectacular vindication of public space that went further than any avant garde ever dared. But most of all, Landscapes of Communism is a revelatory journey of discovery, plunging us into the maelstrom of socialist architecture. As we submerge into the metros, walk the massive, multi-lane magistrale and pause at milk bars in the microrayons, who knows what we might find?

In the craven world of architectural criticism Hatherley is that rarest of things: a brave, incisive, elegant and erudite writer, whose…