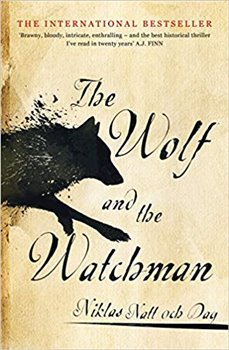 The Wolf and the Watchman

Named Best Debut Novel of 2017 by the Swedish Academy of Crime Writers.
One morning in the autumn of 1793, watchman Mikel Cardell is awakened from his drunken slumber with reports of a body seen floating in the Larder, once a pristine lake on Stockholm’s Southern Isle, now a rancid bog. Efforts to identify the bizarrely mutilated corpse are entrusted to incorruptible lawyer Cecil Winge, who enlists Cardell’s help to solve the case. But time is short: Winge’s health is failing, the monarchy is in shambles, and whispered conspiracies and paranoia abound.
Winge and Cardell become immersed in a brutal world of guttersnipes and thieves, mercenaries and madams. From a farmer’s son who is lead down a treacherous path when he seeks his fortune in the capital to an orphan girl consigned to the workhouse by a pitiless parish priest, their gruesome investigation peels back layer upon layer of the city’s labyrinthine society. The rich and the poor, the pious and the fallen, the living and the dead—all collide and interconnect with the body pulled from the lake.
Breathtakingly bold and intricately constructed, The Wolf and the Watchman brings to life the crowded streets, gilded palaces, and dark corners of late-eighteenth-century Stockholm, offering a startling vision of the crimes we commit in the name of justice, and the sacrifices we make in order to survive.

Named Best Debut Novel of 2017 by the Swedish Academy of Crime Writers.
One morning in the autumn of 1793, watchman Mikel Cardell…